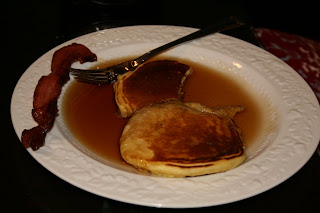 The Tennessee State Library and Archives keeps an online collection of 19th century newspapers. I believe the writers and readers of these newspapers were completely insane. Perhaps it was because they sprinkled lead on their eggs each morning, or their tendency to put opium in their puddings and Methodist sermons. To demonstrate this insanity, I offer you pancake stories from 19th century newspapers:

This one was in two different newspapers 10 years apart. It was just that good a joke, I suppose:

I don’t even know if I can believe this one, but it was right next to scarlet fever news and other items:

Shrove Tuesday and its Pancakes.

To-day is generally known as Shrove Tuesday, though the fact that it is so-called because in olden times people shrove themselves, that is confessed their sins to priests, is as generally ignored. The light-heared French have given it another name, Mardi Gras, signifying “flesh-meat Tuesday,” the day when the “farewell to flesh” is pronounced. The masquerading and other amusements indulged in are by the antiquarians traced back to the Bacchanalia of the Greeks and the Saturnalia of the Romans, and Christian clergy have violently denounced them. In “merry England” the day was celebrated by the burning of effigies, cock-fights, throwing at cocks, games of football, and the “barring-out” of the schoolmaster. One of the customs then in vogues has been preserved to this day, principally among the Irish, and consists in the cooking and eating of large quantities of pancakes. In one of these is placed a ring, and the lucky finder is assured that he or she will be married within the coming year.

Aunt Jemima pancake flour has been around since at least 1892, and according to an ad “A Chicago policeman became polite from eating pancakes made from Aunt Jemima’s Pancake Flour.”

Pancakes also killed people on at least two occasions, both due to arsenic accidentally being put in the pancakes.

So it’s Fat Tuesday, Mardi Gras, Pancake Day. I made pancakes and bacon for the kids. I ate some bacon, but I’m doing without the pancakes. They tend to make me sleepy, especially with the required glass of milk. Of course, I didn’t do anything with Fat Tuesday or Ash Wednesday when I was growing up, but my children are far more familiar with the traditions of Lent and Holy Week. This is partly because of a seeming increase of Mardi Gras observation (Jackson, TN has 2 Mardi Gras parades now) and also because of the attempts by Methodist churches to stick to the Lectionary.

I’m glad the Methodist church has returned to the Lectionary. It gives guidance. It allows for us to be subject to something. I was recently talking to an acquaintance who, though she never stated it directly, made it pretty clear that she was not interested in being subject to anything. She was guided by her own desires in her work and home. If she couldn’t do it her way, she wasn’t really interested in doing it at all.

Of course, we all get like that. But if we can agree to be subject about some things, then we can work harder at being subject to one another. If the church can look at the pulpit and say “on this day, this is the text we will read” then it allows us to agree on something, which is better than we might do without such things.

Tomorrow, I will go get ashes on my head. I will be told that I am going to be dust. I will be there with others who will be reminded of the same thing, and we will remember the saints who have gone before us and with whom we share the life of the Kingdom. Come Lord Jesus.